Beginning with understanding that, most modern chickens have been selectively bred from the “South Malaysian” Jungle fowl genetic stock several thousand years ago, and spread from there. Traveling Westward, these chickens were introduced to the Roman Empire through trade or conquest, and were transferred to the out reaches by Roman travels. These genetic lines continue into modern times and tend to be identified as modern “Fighting Chicken” strains. Chickens were part of their Roman desire for food, eggs and also the Rooster fighting for entertainment goals. The majority of modern chicken breeds come from this Roman stock that had remained in the areas where the Roman Empire’s influence diminished.

These Malaysian Jungle fowl chicken types also traveled East and they encountered a different legacy. At some point while migrating toward South America across the Pacific Ocean with Polynesians there was a rare natural occurrence during their travels or after they arrived in South America. Somewhere along the way they took a “Retro Virus” into their Genome. This ability is received as genetic trait through a Retro virus causing them to produce blue colored egg shells as a genetic trait. (A Retro virus can be assimilated into DNA and transferred to their progeny.) Wild birds like the Robin, for example, with their classic “Robin’s egg Blue” color, have occurred in this way as well. There have been reports of blue egg laying wild chickens on some Islands in Hawaii but I do not know if they are there from recent or ancient times. They have long flat tails for flying, with instincts and abilities that allow them to survive in the wild still to this day in many places.

The geographical area and indigenous Peoples and the chickens stock in the Southerly regions across the continent of South America are still called “ Mapuche” in modern times. Some were called The Araucana People because of their location ( Arauca ) and they are/were part the of Mapuche culture that was known to have some of these blue egg laying chickens perpetuated in the Southern part of the South America continent for thousands of years before the Europeans arrived. Dr. Bustos of Santiago, Chile exhibited tail-less tufted , blue egg laying chickens in the early 1900’s that he acquired and developed from the Mapuche chicken race. That is apparently when the name “Araucana “ chickens was used in place of “Mapuche”. The term Araucana chickens is used commonly in the United States and other counties for the historically correct “Mapuche” chicken types and a specific combination of their traits. They continue on in the present in their native home land with some isolation and much diversity that has kept them going for so long with their own criteria for keeping them viable. Because of the different looks necessary to maintain and produce the traits in combinations that are desired, a diverse flock is essential for birds with ear tufts or are tail-less. Tailed and non – tufted types are less vulnerable to genetic lethal factors associated with those physical types. Looking at a modern Mapuche flock, one might think they are unrelated, but that is not the case with these chickens.

When the Europeans arrived with their chickens aboard ships they traded and likely exchanged egg laying chickens in the 1500’s and since that time. However it should be noted that the Mapuche peoples were never fully dominated by Europeans and maintained their blue, and associated green egg laying ability chickens still today in South America. The Mapuche race of chickens have all the foundation traits required for the desired standard traits set by each Country that has endeavored to identify blue or green egg laying chickens as a specific breed type. Tail – less or not, tufted or not, blue or green eggs with blue being preferred, and the top knot of “Cream Legbar” blue egg laying chickens. The blue trait in combination with a pink or brown egg trait, produces a green appearing egg color, even though the shell continues to be blue. The green looks like a coating on the blue egg shell which becomes obvious after cracking the shell and looking at the inner aspect of the shell.

With the diversity of Blue egg laying chickens being established long before any European contact, it is important to include some “Diversity and Purity“ in continuing the blue egg laying abilities into the future. The attitude and appearance of the blue egg laying chickens in Modern times in Chile and other South American Countries indicate a “Work in Progress” looking flock. Participation with many different looking birds in color and anatomical traits existing in the same flock is common and is not something that the Europeans or Americans readily accept. This further continues as chicken flocks progress toward long term flock maintenance to achieve goals or increase consistency.

Standard of Perfection for Mapuche types like : Americanas, Araucanas, Cream Legbars, bantams, standard sized and the rest of the blue or green egg producers, are decisions that seek to provide consistency of color or anatomy. This goal setting standard is desirable for many and is difficult to continue without help from people with the same goals. Each Country has their own preferences and “Standards of Perfections” that differ from one another which brings us where we are today.

With the creation of the Araucana/ Mapuche “ Registry” that allows participation from members to advance the knowledge and availability of blue or green egg laying chickens, we are seeking a way to interact, enjoy and perpetuate these fine examples of nature’s wonderful abilities. This registry provides a way for members to do this and much more addressing the needs of members, their birds and those that have plans for the future, local and international. 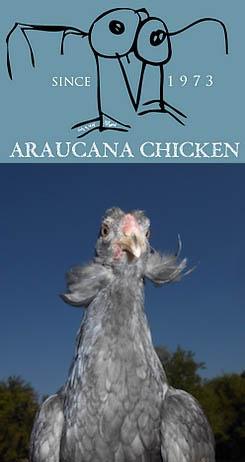 2021 - Araucana Registry
Website by Sundial Design
Back To Top